Arindam Dutta is Associate Professor of Architectural History and Theory at the Department of Architecture, MIT. He directs the History, Theory, Criticism Program in Architecture and Art and the Master of Science in Architecture Studies (SMArchS) program at MIT. He is the author of The Bureaucracy of Beauty: Design in the Age of its Global Reproducibility (2007), and the editor of A Second Modernism: MIT, Architecture, and the “Techno-Social” Moment (2013). He is currently at work on a number of projects. He is working on a book titled Ancestralities: Nature, Architecture and the Debt. The research explores the relationship between sovereignty and architecture, the first examined through the modern apparatus of debt, the latter through the history of institutions. Another project, Liberal Art Practice against the Liberalized Public Sphere: Sahmat 1989-2014, involves an extensive and detailed examination of the political challenges faced by artists in India with the corresponding rise of Hindu religious fundamentalism and neoliberalism in India. On his shoulder in the picture is Lalon (at one-year old here), born August 10, 2011 in the middle of an Aggregate meeting. 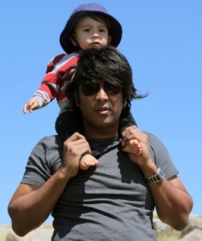