Defensible Space and the Open Society 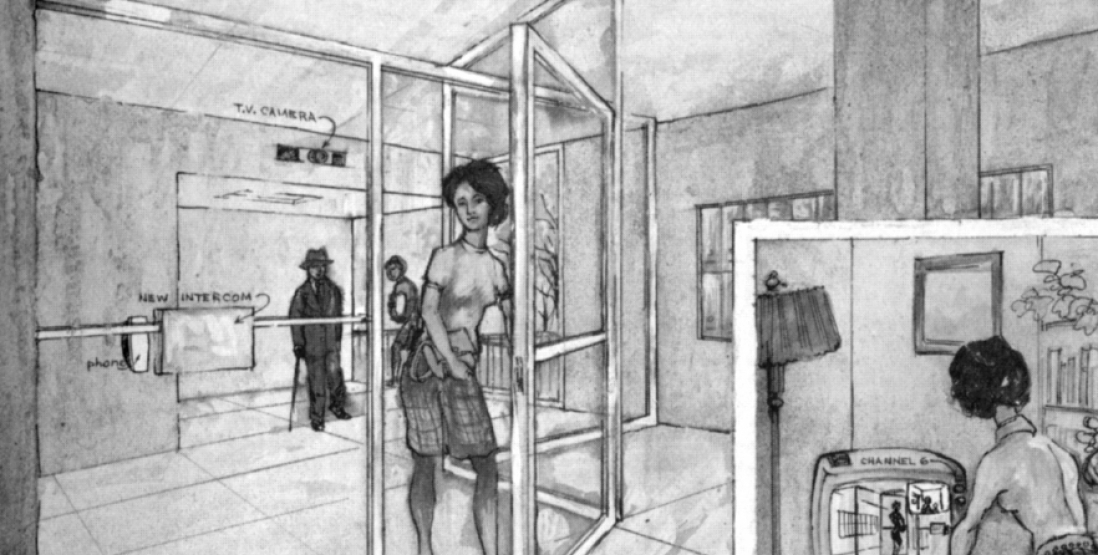 View of modified lobby at Bronxdale. Modifications included a closed circuit TV that was intended to allow each resident to monitor the lobby on his or her television set. Newman indicates that the lobby and elevator were chosen for surveillance as these areas of the building had suffered the most crime. Illustration from Oscar Newman, Defensible Space (New York: Macmillan, 1972), 183.

After racial inequality prompted rioting in Detroit, Newark, New York, Los Angeles, and other cities in the late 1960s, federal concerns over crimes against property and preoccupations with creating a psychopathology of African-American city dwellers eclipsed outrage over the unjust and unequal treatment of black people.1 This was evident in the reports of three high-profile commissions appointed by President Lyndon B. Johnson: the Kerner Commission’s Report of the National Advisory Commission on Civil Disorders (1967); the Douglas Commission’s report, Building the American City (1967–1969); and the Kaiser Commission’s report, A Decent Home: The Report of the President’s Committee on Urban Housing.2 The Kerner Commission’s report featured a series of vivid photographs by Gordon Parks, which also appeared in LIFE magazine. Parks’ images put a face to the so-called pathology of the “personality factory” of black families in the “slums,” and displaced concern with structural economic issues onto residents themselves. Similarly, the Douglas Commission report cataloged losses to property that resulted from rioting before they addressed the human costs of inequality.

Over the next twenty years, officials came to see vandalism and property damage as not just an index, but also a cause of social ill. One outcome was the rise of “Broken Windows theory,” which suggested that fixing and preventing property damage could repair and preclude unlawfulness and civil disorder. Elaborated in 1982 by social scientists James Q. Wilson and George L. Kelling, Broken Windows theory has shaped the policing strategy employed today in New York and many other cities by encouraging police departments to target even small crimes against property.3 Combined with a growing emphasis on order maintenance policing, the Broken Windows approach increased the number of enforcement interactions between officers and citizens, setting the stage for pervasive harassment and occasional deadly violence. As such, Broken Windows theory has been heavily criticized by those who object to its conflation of visual signs of blight with problems of a more human nature.

Wilson and Kelling’s theory was received by a city already acquainted with the work of architect and urbanist Oscar Newman, who had used New York City Housing Authority police data to develop his own theory of defensible space between 1969 and 1972.4 Broken Windows and defensible space are linked in popular understanding and in public policy documents.5 Both assume that combating visual signs of blight can improve a neighborhood and prevent crime. However, a closer look at Newman’s 1972 book, Defensible Space: Crime Prevention Through Urban Design, which helped launch the Crime Prevention Through Environmental Design (CPTED) movement, shows that the earlier version of Broken Windows theory emphasized self-policing over municipal enforcement. Each rests on the flawed assumption that reducing visual signs of blight (not to mention designing a better urban environment) is an acceptable substitute for solving the structural and social problems facing black Americans. 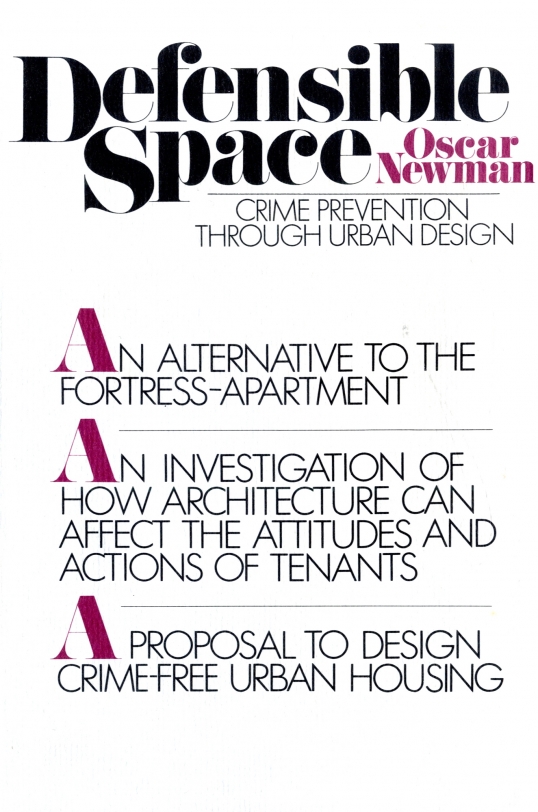 Defensible Space included a chapter on “Image and Milieu,” which focused on the damage caused by the stigma of living in a housing project plagued by vandalism. Newman’s conclusions, informed by psychological research, suggested that architects could strengthen civil society and preclude crime by creating “defensible spaces,” clearly outlined territories that would encourage residents to police their own spaces. His criminological model was in fact a biopolitical one, governing through close attention to the available data about crime in public housing and based in a social scientific theory of mind.6 Newman promoted the idea that housing should be redesigned to engender feelings of ownership among residents so that they would police their own turf. Like many soft-power solutions, such self-policing would be simultaneously liberating (from aggressive policing) and constraining. Freedom from violence is clearly an improvement, but in cases where the fear of crime is not in proportion to the actual threat of violence, Newman’s soft-power model simply introduces “community” self-policing that alienates neighbor from neighbor, creating suspicion rather than safety.7

Newman opened Defensible Space by tying social good to architectural forms. Pointing out that the 1968 Federal Housing Act had recommended that families with children should only be housed in high-rise buildings when there is no other option, he attacked the high-rise multifamily dwelling. This argument was underscored by the vivid images of the implosion of the Pruitt-Igoe housing complex featured on the book’s dust jacket (Defensible Space was published shortly after the images appeared in LIFE magazine). The cover featured the caption: “The final remedy found by the city of St. Louis for part of its public housing problem.”8 Newman justified his arguments against high-rise housing projects by noting that many police officers were afraid to enter. The fabric of society was unraveling, Newman argued, and the only answer was to redesign housing to be partitioned and hence, self-policing. 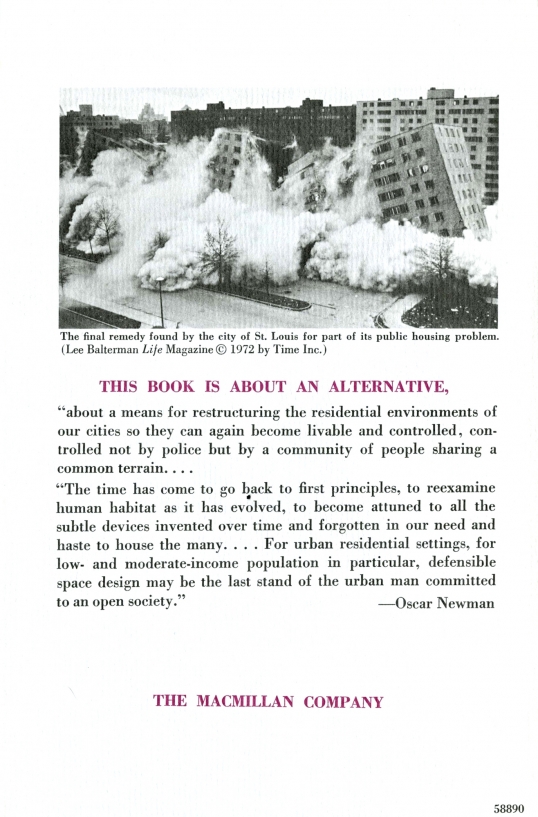 The back cover of Oscar Newman's Defensible Space argued that the book would provide an alternative to the sensational partial demolition of Pruitt-Igoe a few months earlier in March of 1972. He argued that it wasn't simply modern architecture that was to blame but rather the large, shared spaces of hallways and grounds. Oscar Newman, Defensible Space (New York: Macmillan, 1972).

Newman was sensitive to the effect of vandalism on the “image” of a place, arguing that the stigma of living in a dilapidated environment would make residents less likely to defend it. But his theory was more complex, responding to the new research in social psychology, particularly the idea of the “bystander effect,” which predicted that a bystander was more likely to intervene if it were clear who should respond.9 These theories, and much public fear of crime in under-policed areas, were provoked by much-publicized murders such as the 1964 killing of Kitty Genovese, who was allegedly murdered close to home while her neighbors watched and did not intervene.10 Undifferentiated groups were dangerous, according to psychologists, as each bystander could evade civic obligation in anonymous unclaimed spaces. But with a clear sense of responsibility and ownership, a bystander would become a defender. The architect’s role was to understand the findings of social psychology and redesign the urban environment to reinforce the bystander effect. In conversation with psychologist Erving Goffman, Newman noted that the need to act was too immediate to wait for additional psychological proof. Where Goffman felt chastened by social science’s inability to predict the racial and student protests of the 1960s, Newman argued that architects and administrators needed to do something to improve the situation even while “science” needed more time to produce more proof.11 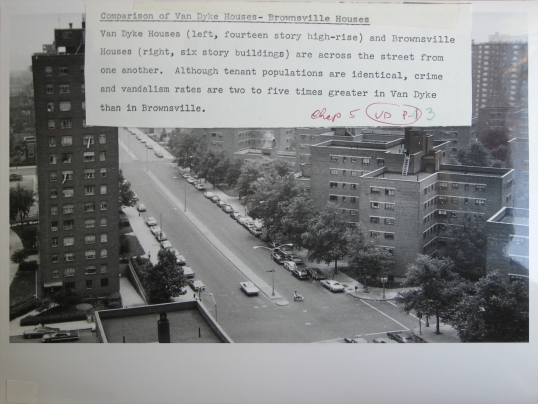 Not only did Newman believe that architectural arrangements could yield social disorder, as they supposedly had at Pruitt-Igoe, he also believed, as did many others at the time, that “good” design could be a crime-prevention tool.12 By giving over public space to particular “proper” and law-abiding citizens, such design would, in theory, leave little room for those to whom it did not appeal. Newman’s alternative to high-rise, high-crime public housing was a form of low-rise housing that would clearly delineate spaces for each unit, creating security by establishing clear boundaries and thresholds. The book includes positive examples that had already been built, and the idea would continue to inspire projects such as Marcus Garvey Park by Kenneth Frampton and two of his students, who were intrigued by defensible space.13 Arguing both for the removal of forms of space that he believed would inhibit the creation of safe communities and for the creation of new “safe” spaces, Newman told readers that his theory would help to preserve a way of urban life that was under imminent threat. Defensible space, he wrote, just might be the “last stand of the urban man committed to an open society.”14

Though it was challenged by social science experts and those who studied the new field of environmental psychology, the book was a success.15 It was widely reviewed in the popular media and sold well. The 1973 paperback issue boasted a laudatory quote from TIME magazine on its cover and praise from the San Francisco Examiner, the Sacramento Bee, the Village Voice, the New York Times Book Review, and Forum, as well as an endorsement from Ada Louise Huxtable, the New York Times architecture critic, who called the book “a supremely significant study.” Newman’s way of thinking supported the demise of the high-rise housing project typology and the rise of New Urbanist planning and design strategies, and his ideas remain the basis for an ongoing CPTED industry.

Newman’s theory of defensible space paved the way for the doctrine of Broken Windows policing that led to the multiple arrests and eventual death of Eric Garner. But it is important to understand the mechanisms by which Newman thought that defensible space would lead to the creation of an open society, because current interpretations of his theories, such as Broken Windows policing, have abandoned the architectural and biopolitical dimensions of his work. Despite the major problems of alienation and self-surveillance implied by defensible space theory, as well as its encouragement of environmental determinism, its goals and assumptions were quite different from those that undergird Broken Windows theory. 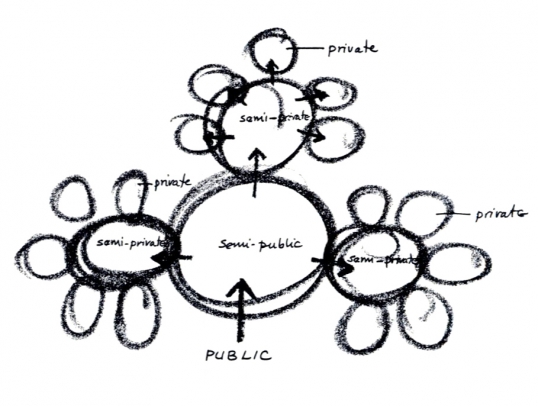 Diagram of discrete defensible spaces clearly allocated to various residents and small groups of residents. Newman advocated for construction of thresholds and boundaries to reinforce natural human territoriality in order that residents would intervene and prevent crime in their spaces. From Oscar Newman, Defensible Space (New York: Macmillan, 1972), 9.

Newman hoped that defined territories would make cities safer, and less violent, and would hence preserve the urban, open society that was very much under threat in the late 1960s. Like Jeremy Bentham, he proposed a soft-power solution to policing, imagining that prisons would be made more humane and the abuses by guards reduced by the self-surveillance that panoptic architecture promotes. Translated to the urban environment, the model of self-policing has yielded a private, gated world that has not reduced fear or increased trust. Crime rates under “Broken Windows” may be lower overall, but the costs to the open society that Newman wanted to defend are uncountable. And Newman’s intentions—to preserve community and to develop an open society, rather than elucidate a theory that has led to incarceration on a nearly unprecedented scale—seem lost today.

Oscar Newman’s architectural theory paved the way for Broken Windows policing, but it also aimed to preserve community and develop an open society.